Yeah... that title blows. My original title was "Speed Kills" but with the celebrity death of the weekend, I thought it was inappropriate. I probably shouldn't have said it here either. Oh well. I recently did a trade with a new friend of mine named Roger. The trade involved this Willie Wilson relic from 2005 Donruss Champions for that 2013 Topps Update Max Scherzer SP I pulled. I was happy with the trade as it was, but Roger also threw in plenty of Royals goodies with some of my favorites below. 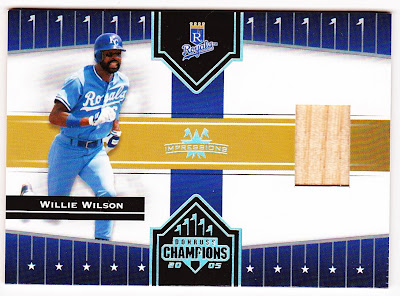 The best part of this deal isn't the trade itself with Roger, it's that he's committed to the Typhoon Haiyan Charity Break AND he's agreed to donate another box! It's a big one too... I'll hold off on the announcement because it deserves its own post.

I've also received some goodies from Nomo's Sushi Platter and Brad's Blog to tackle some set needs and spoil me with Royals. Thanks fellas, keep your eyes on your mailboxes!
Posted by View From the Skybox at 6:00 PM