First off, thank you so much to everyone who shared their support after my last post. It means more than you could ever know. It's only fitting that during such an up and down year of my life, my beloved Royals would finally reward a lifetime of grief with a "playoff" spot. Even more fitting, I am one of the lucky few to win (a shot to buy) tickets to the wildcard game. I'll be in the crowd tomorrow night trying my best not to curse Ned Yost with every breath.

My heart is already beating in overdrive so I have got to find a way to relax. Thanks to a couple great trades from Design on Deck and Backstop Cards, I have just what I need to do that.

Marcus has a corner on the Archi Cianfrocco market, but he ensured that I now have the market on Wally Joyner's. I guess I was Wally'd? 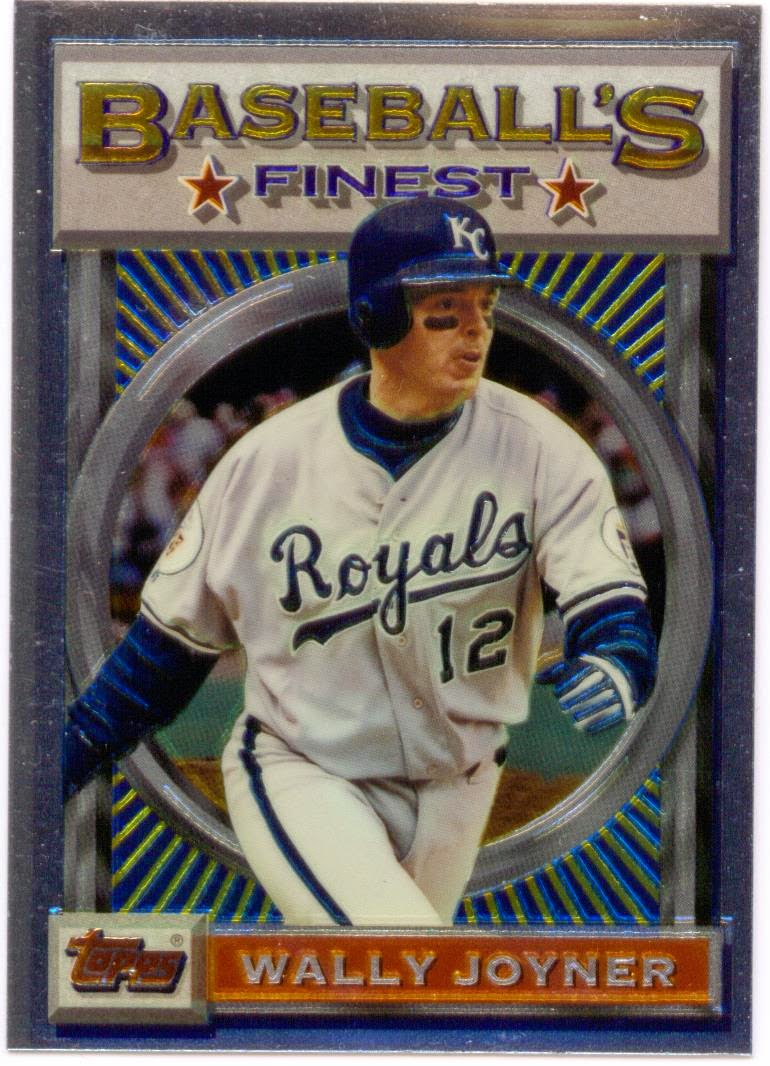 That's the first '93 Finest card I've ever owned. It's gorgeous! Too bad 21 years later Topps hasn't yet find a way to match the quality of the first set. 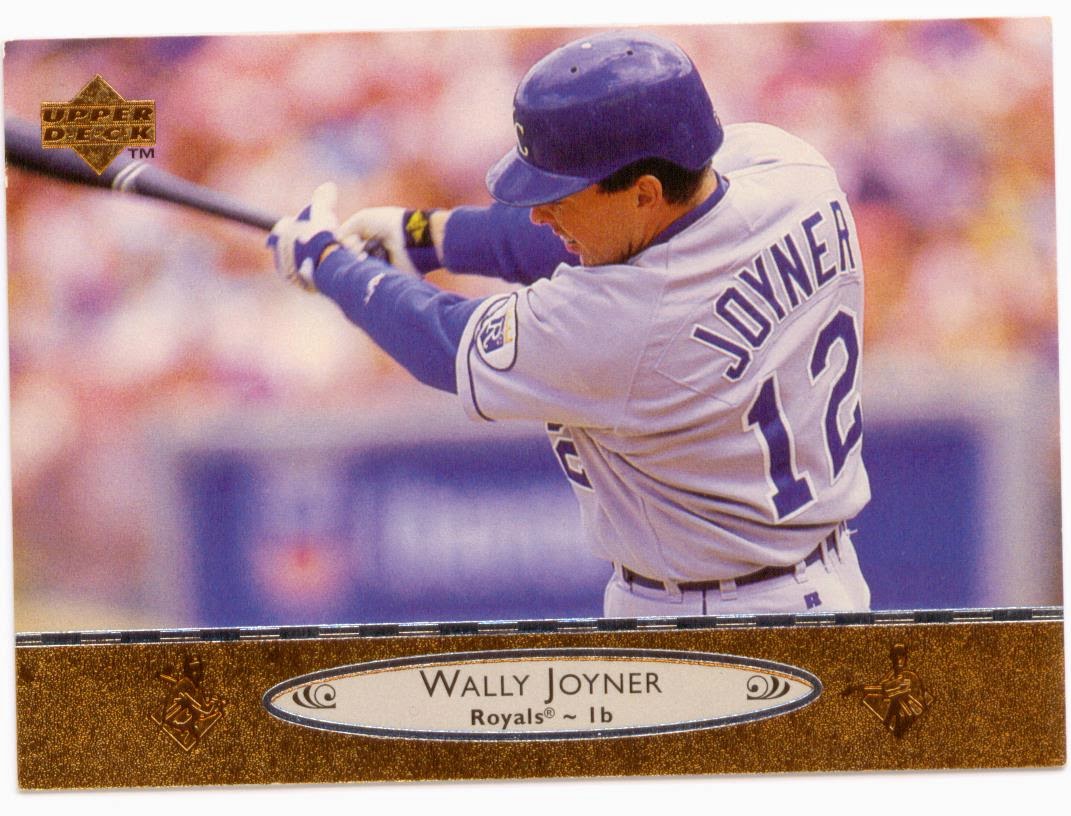 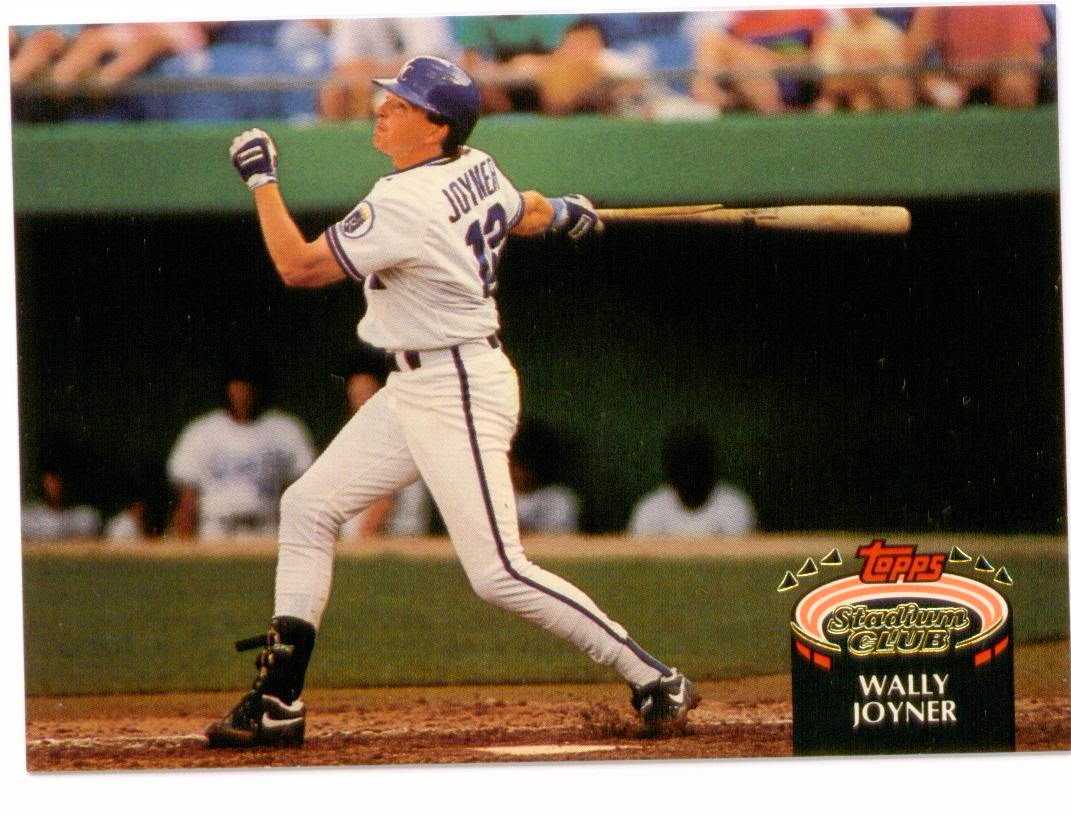 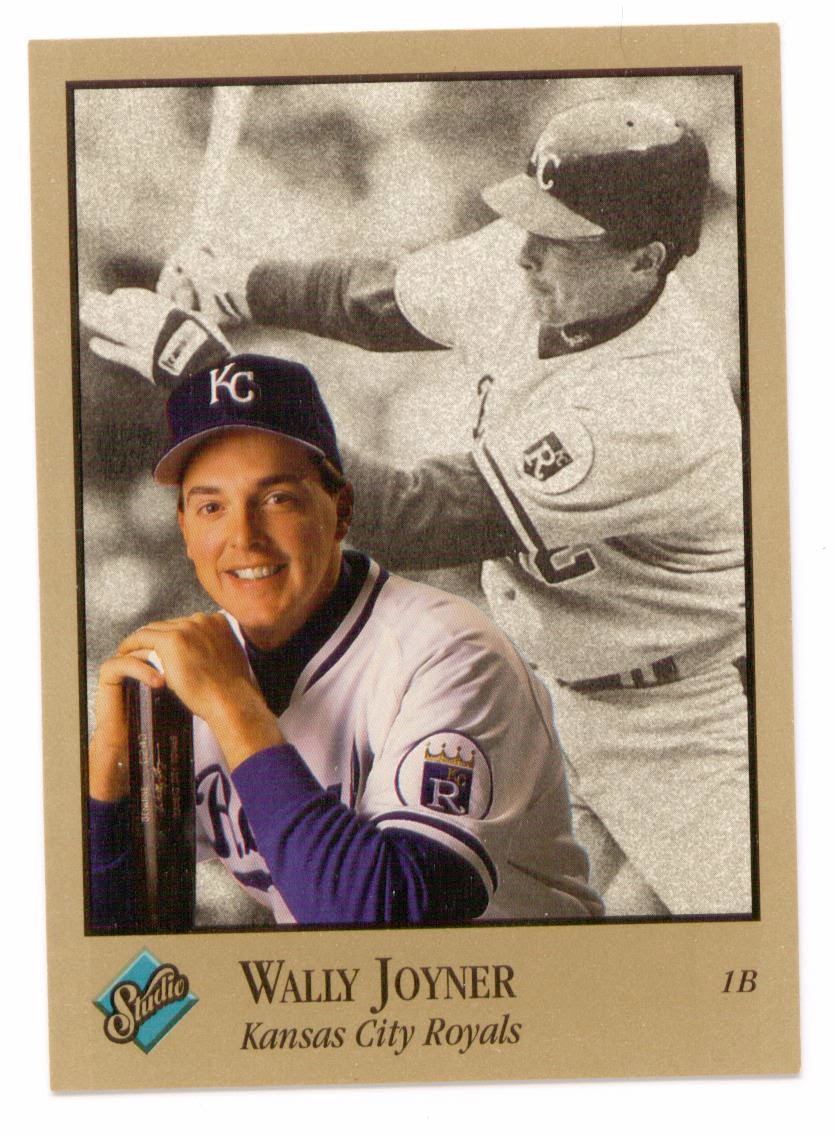 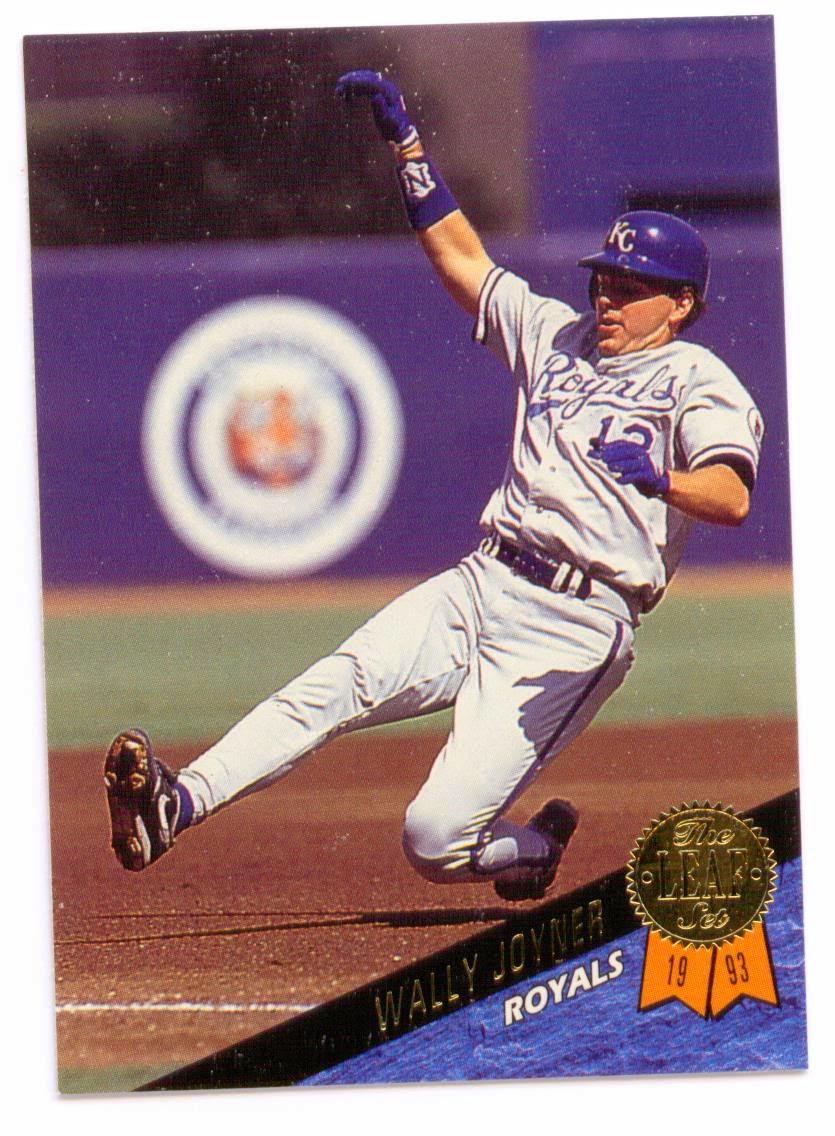 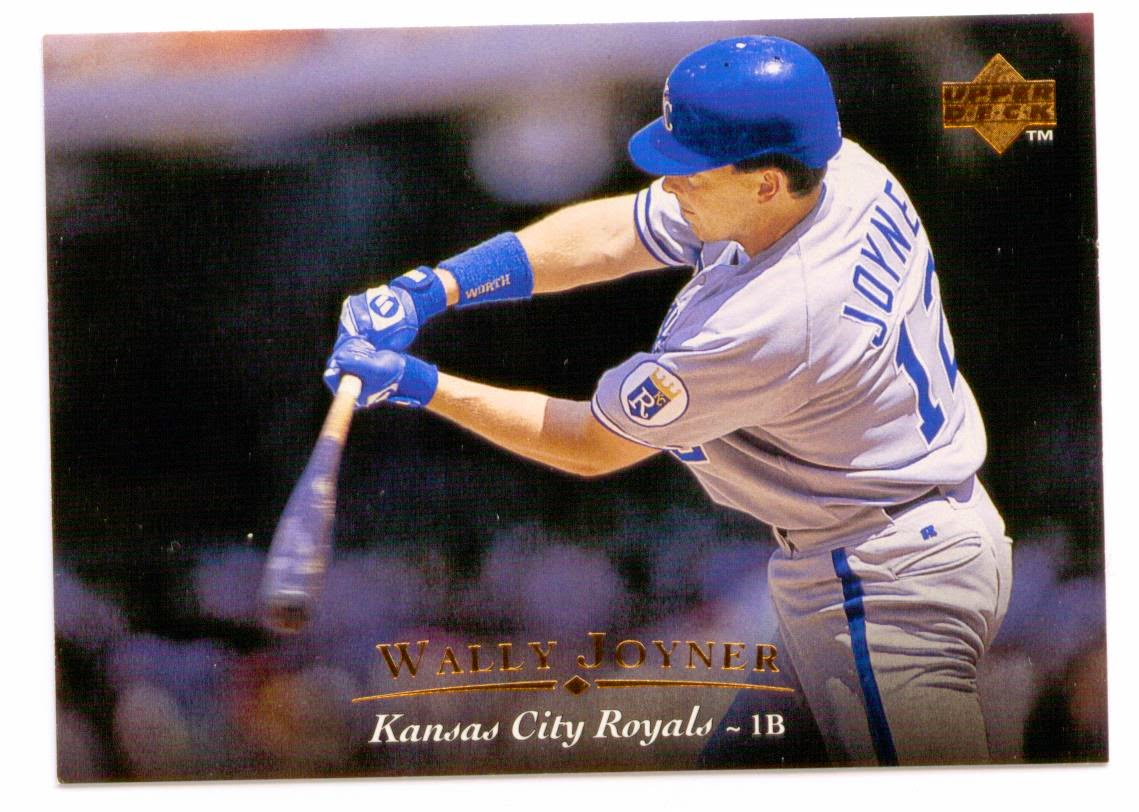 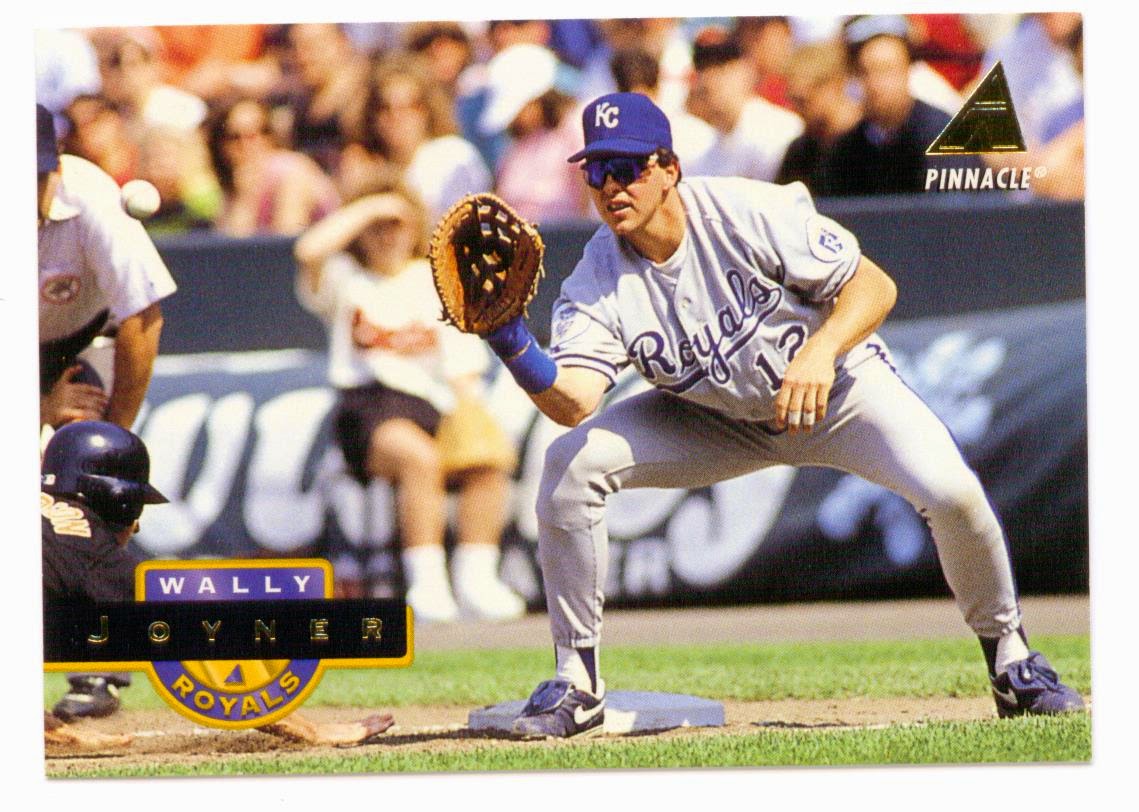 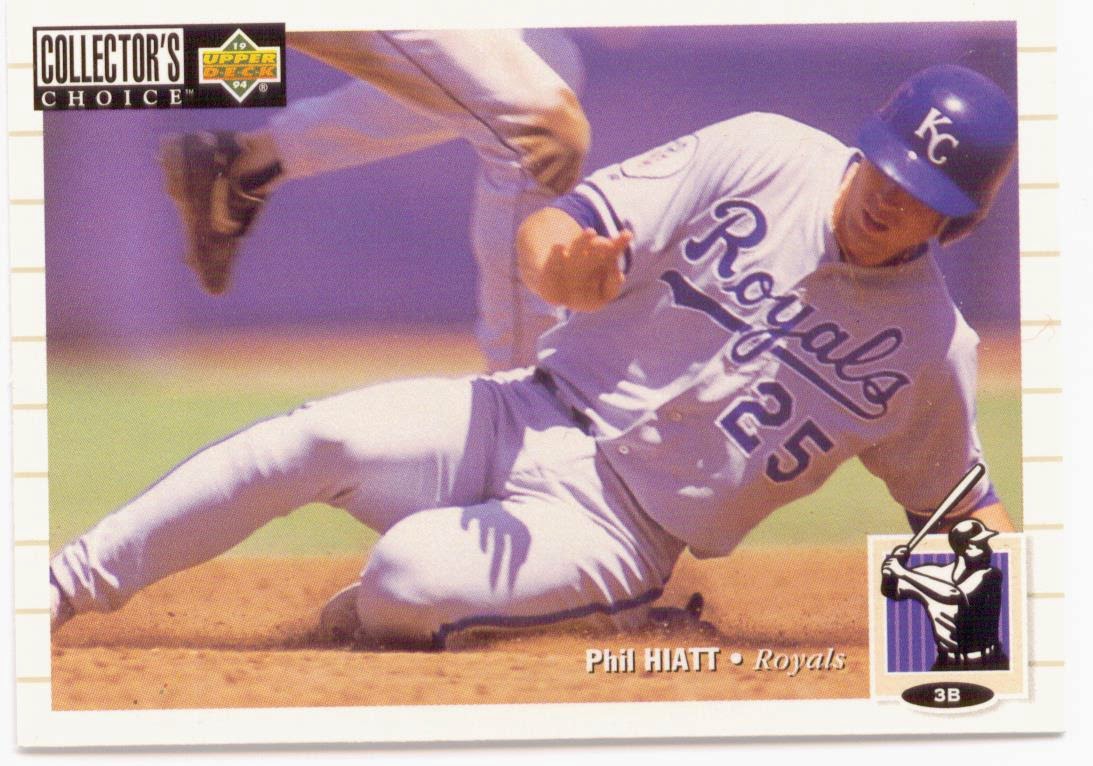 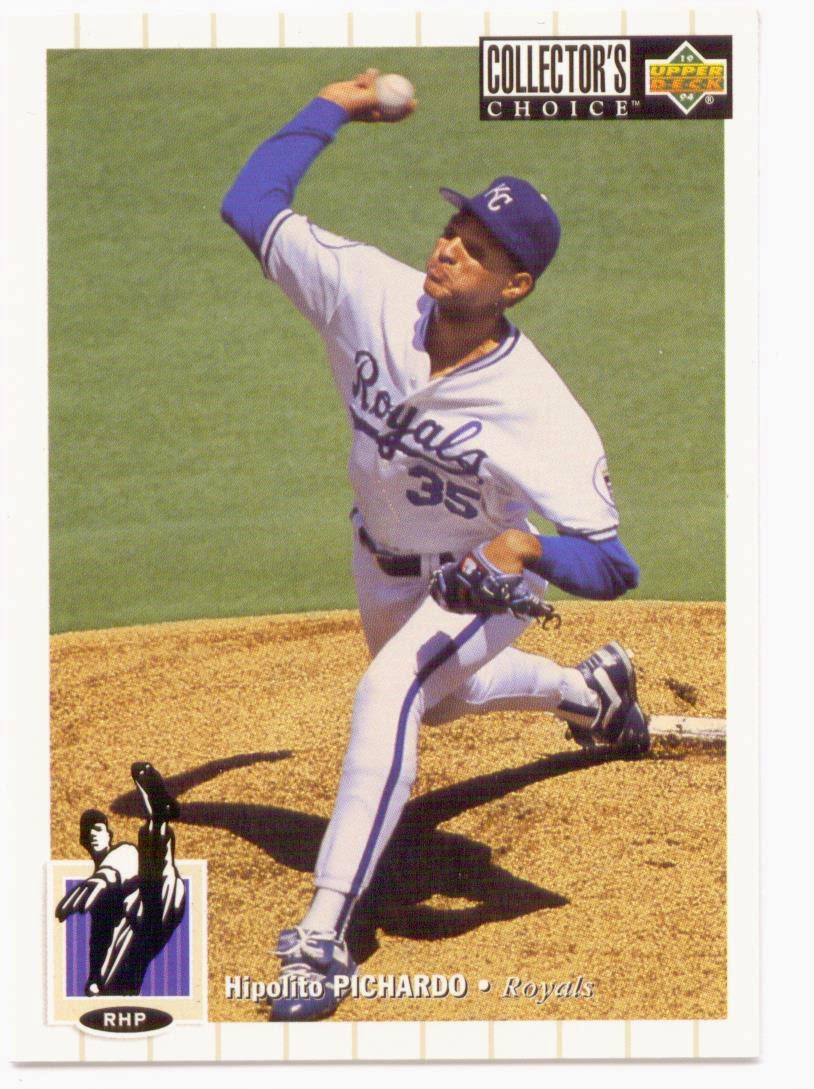 This is the man who needs to replace James Shields in 2015 if KC has any shot at returning next year: 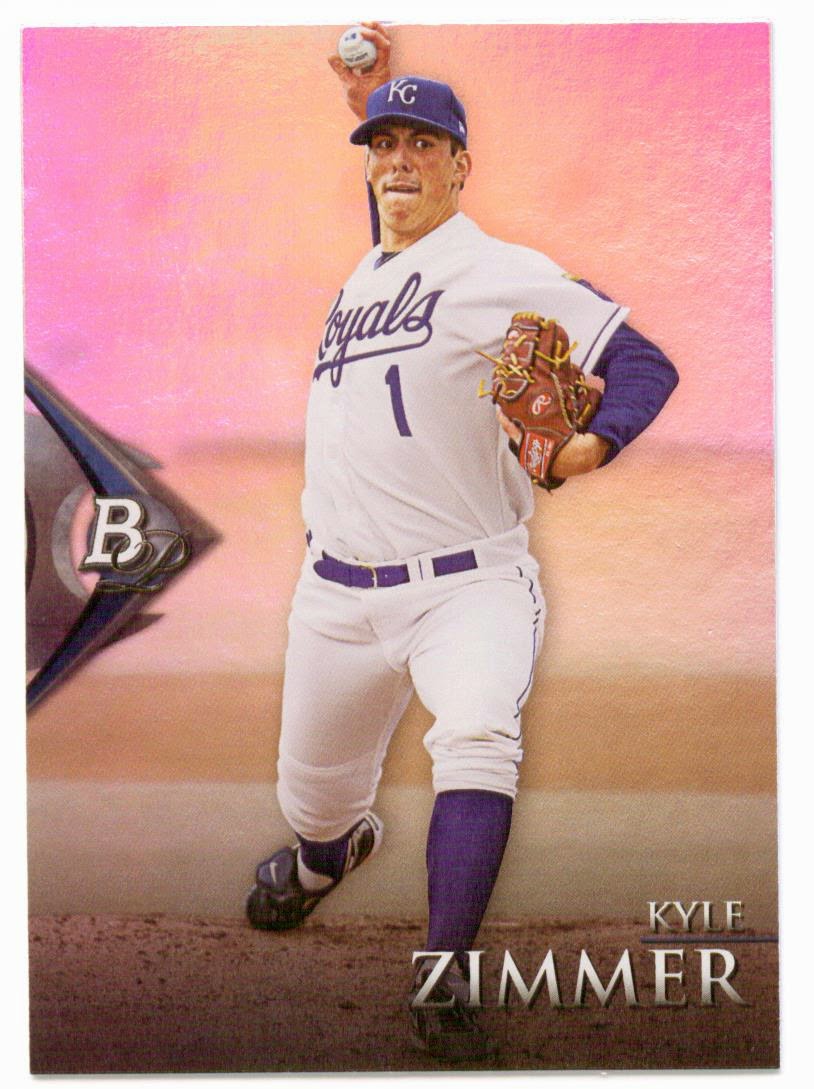 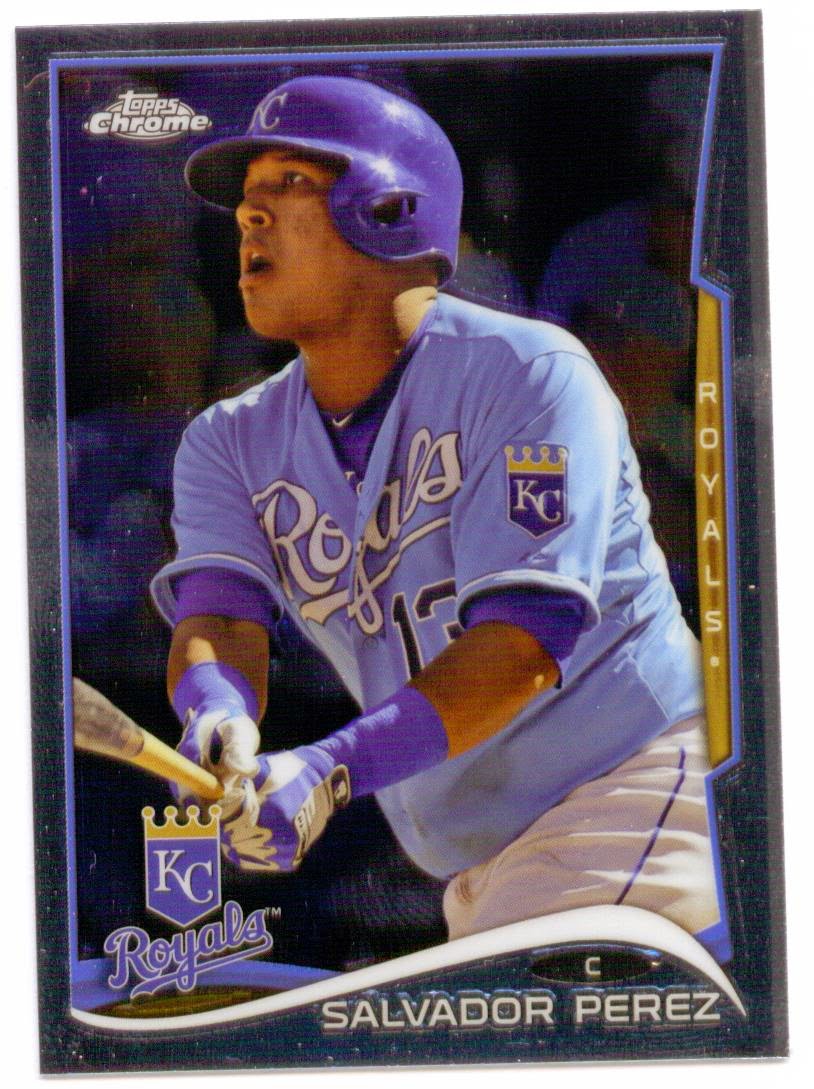 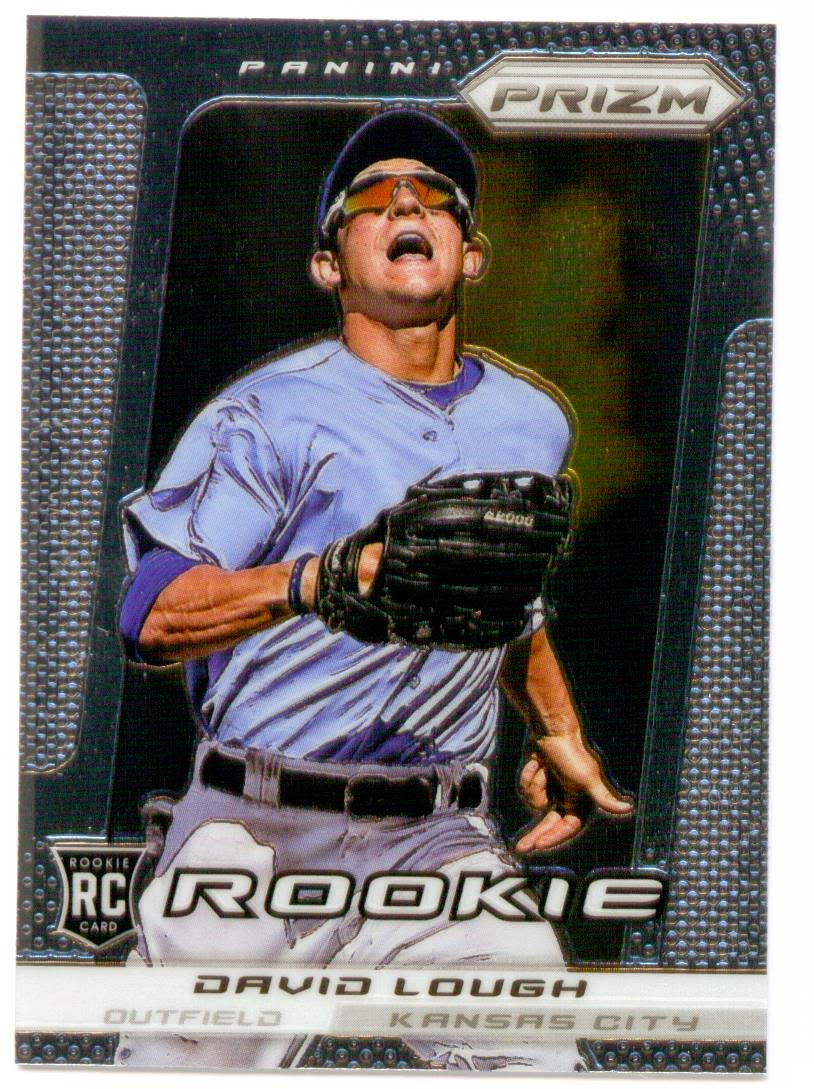 Bubba Starling will probably still be in Bowman products through 2018 when he finally hits minor league free agency. 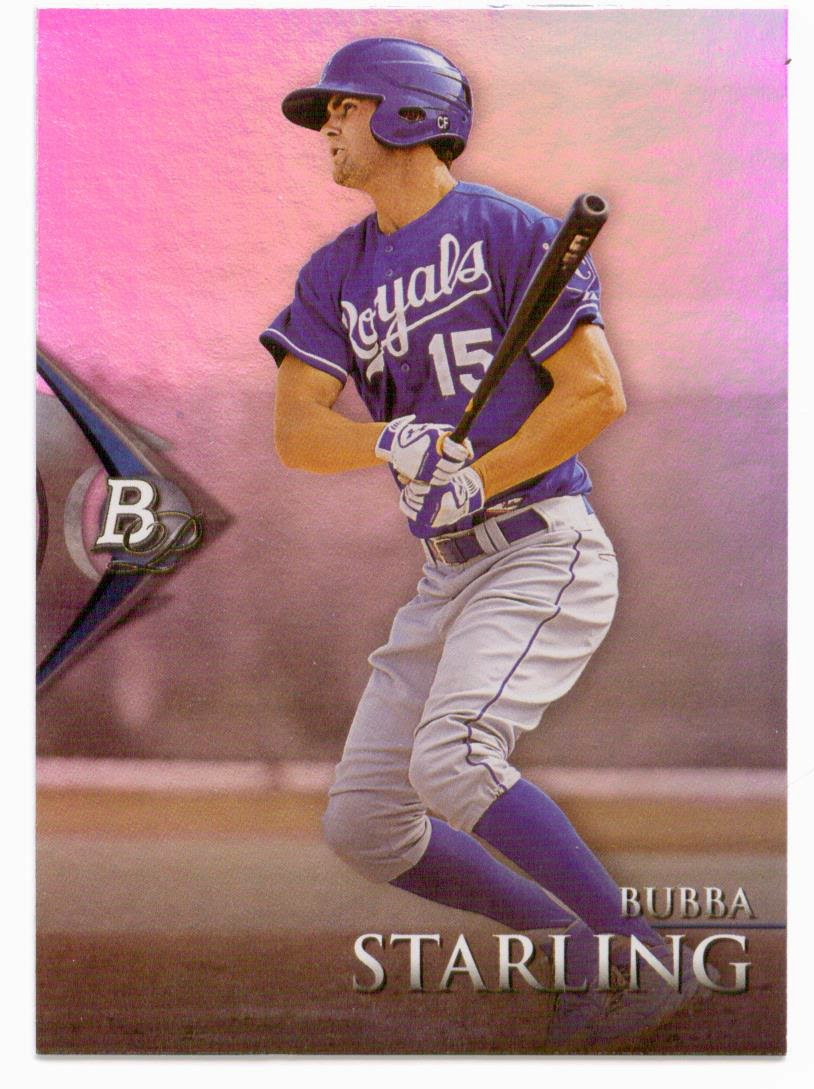 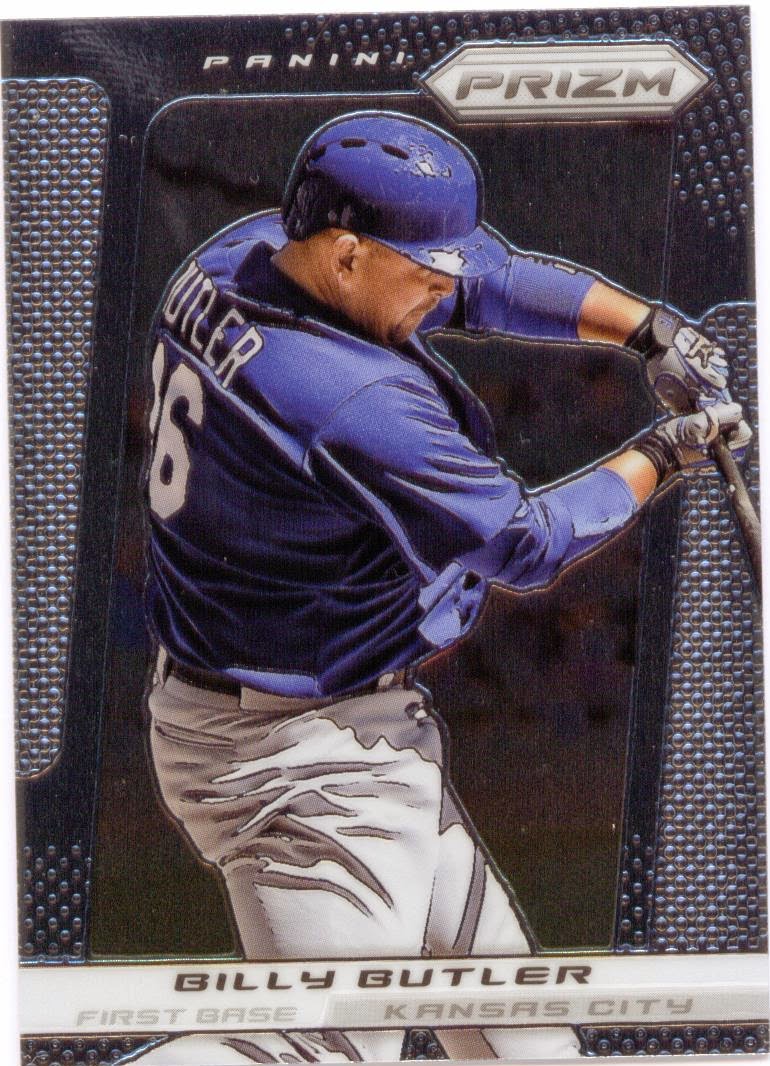 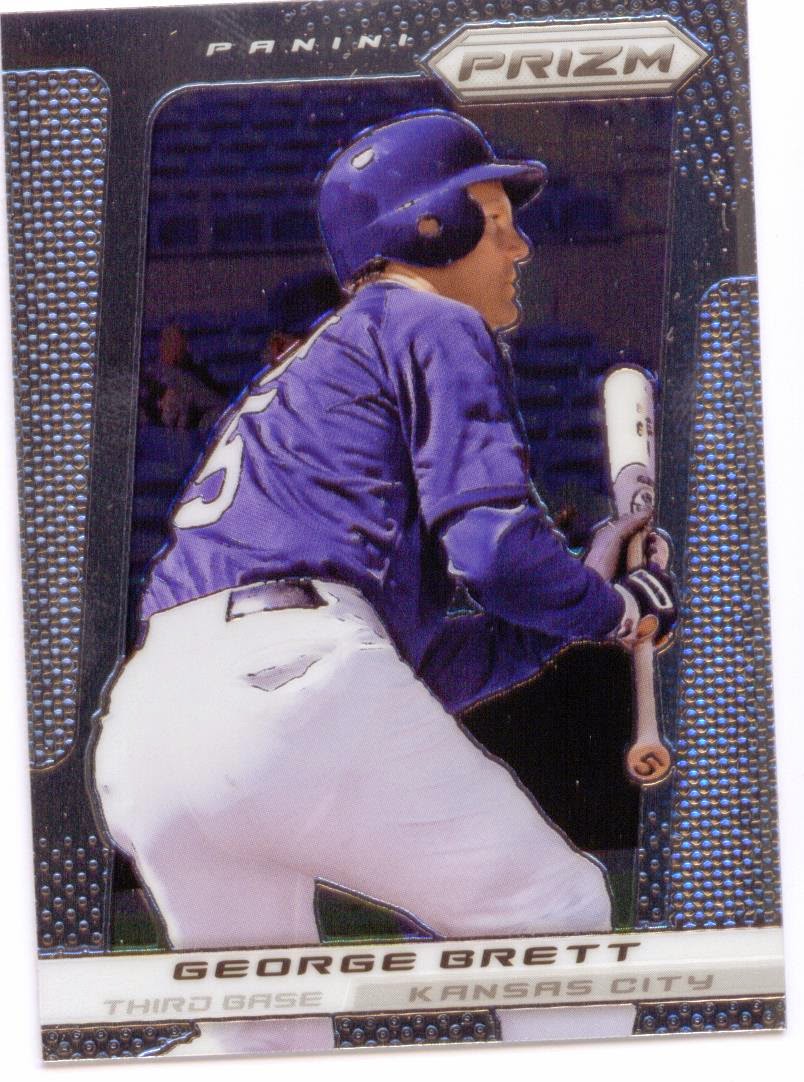 Ross and I made a deal for the black 2014 Topps Chrome Alex Gordon card below, but he tossed in some sweet Blue Border Beauties to make my day. 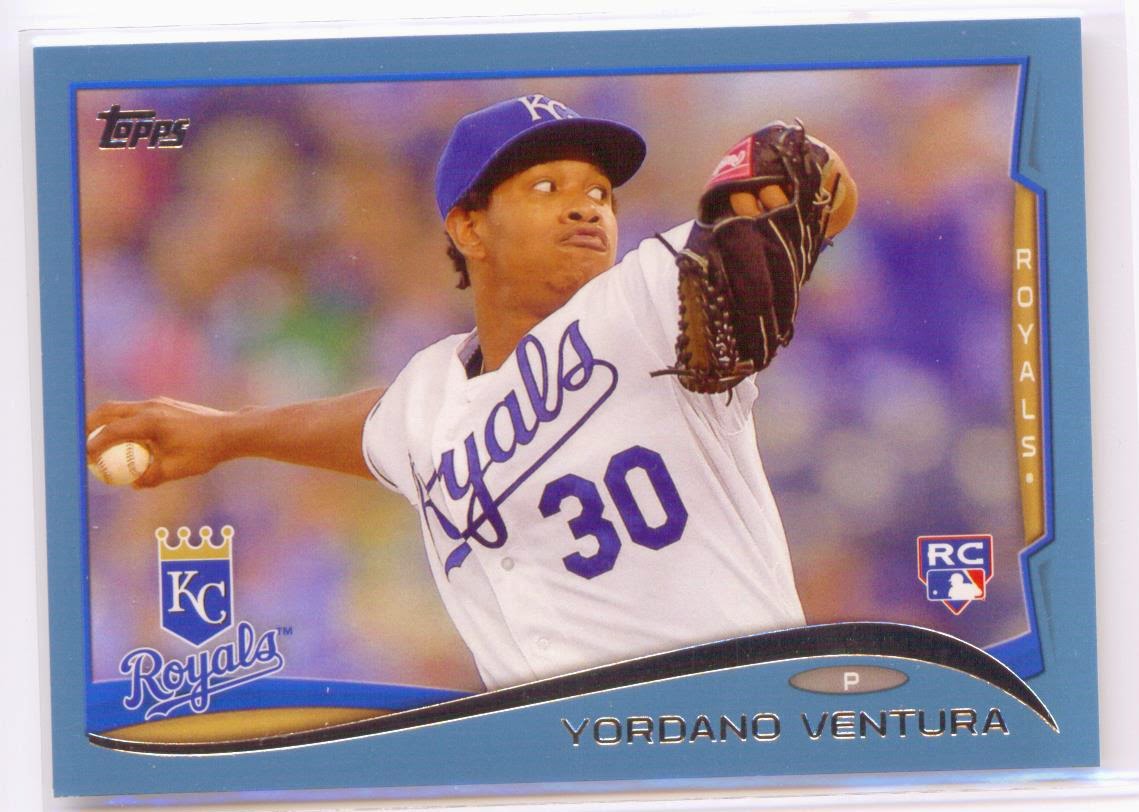 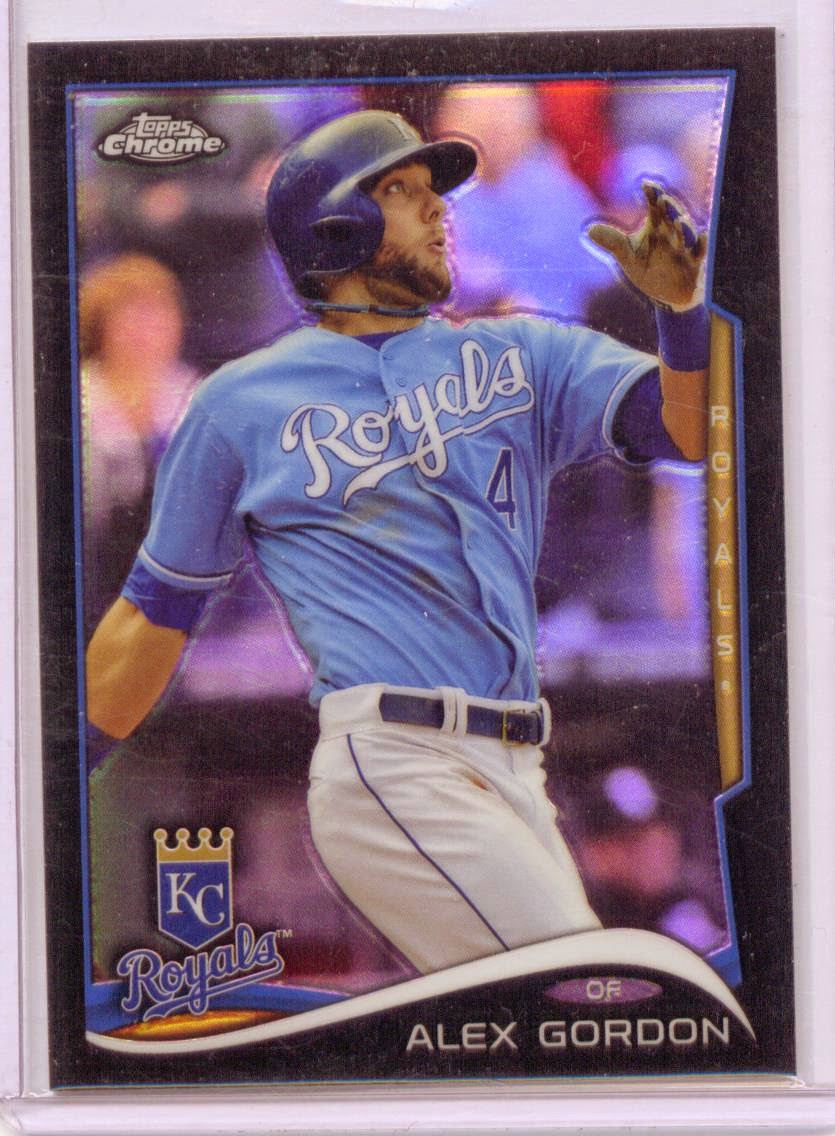 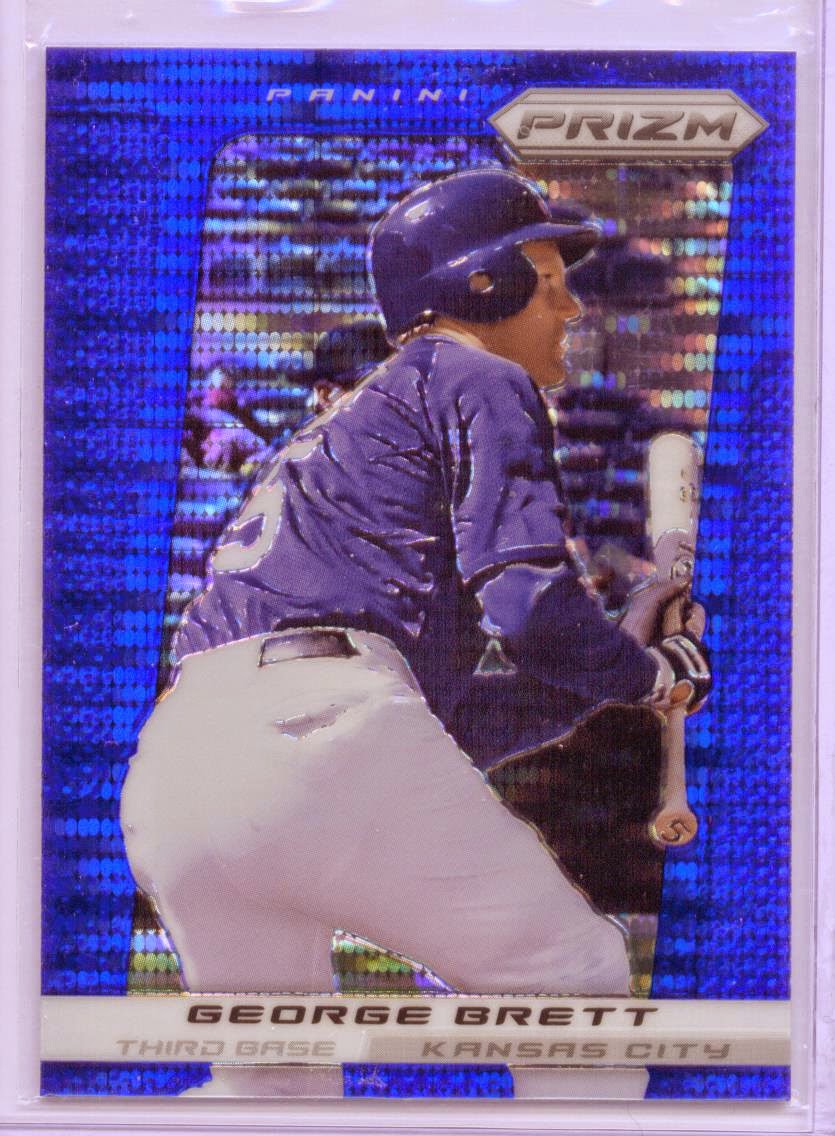 It's even prettier in person. 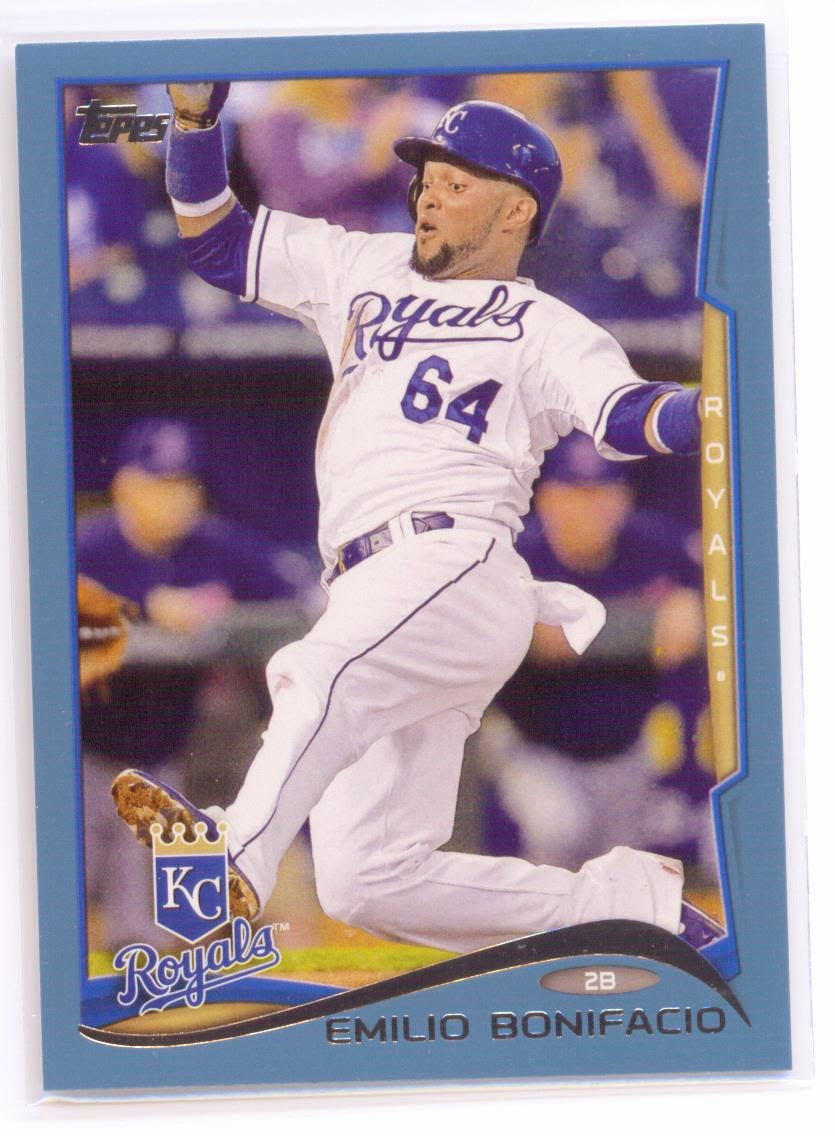 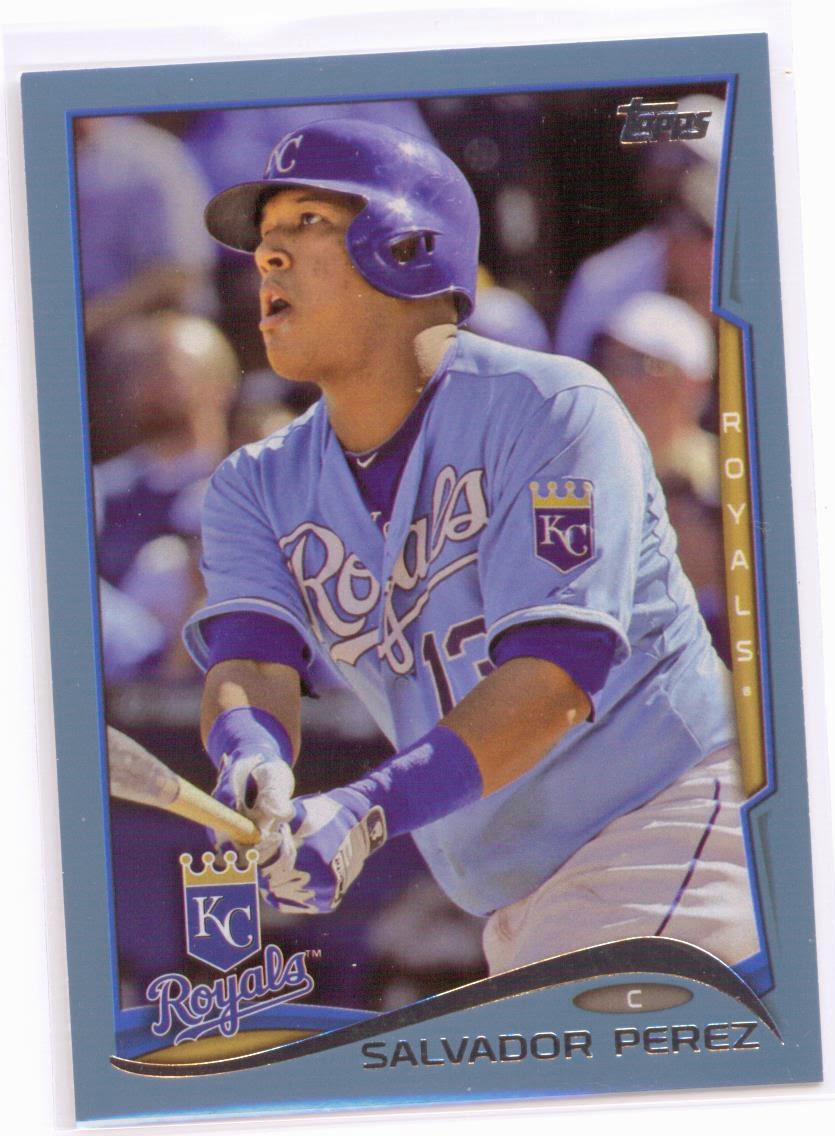 Lastly, I'm more than a little behind on showing off PC pickups. Here's a super-sized taste: 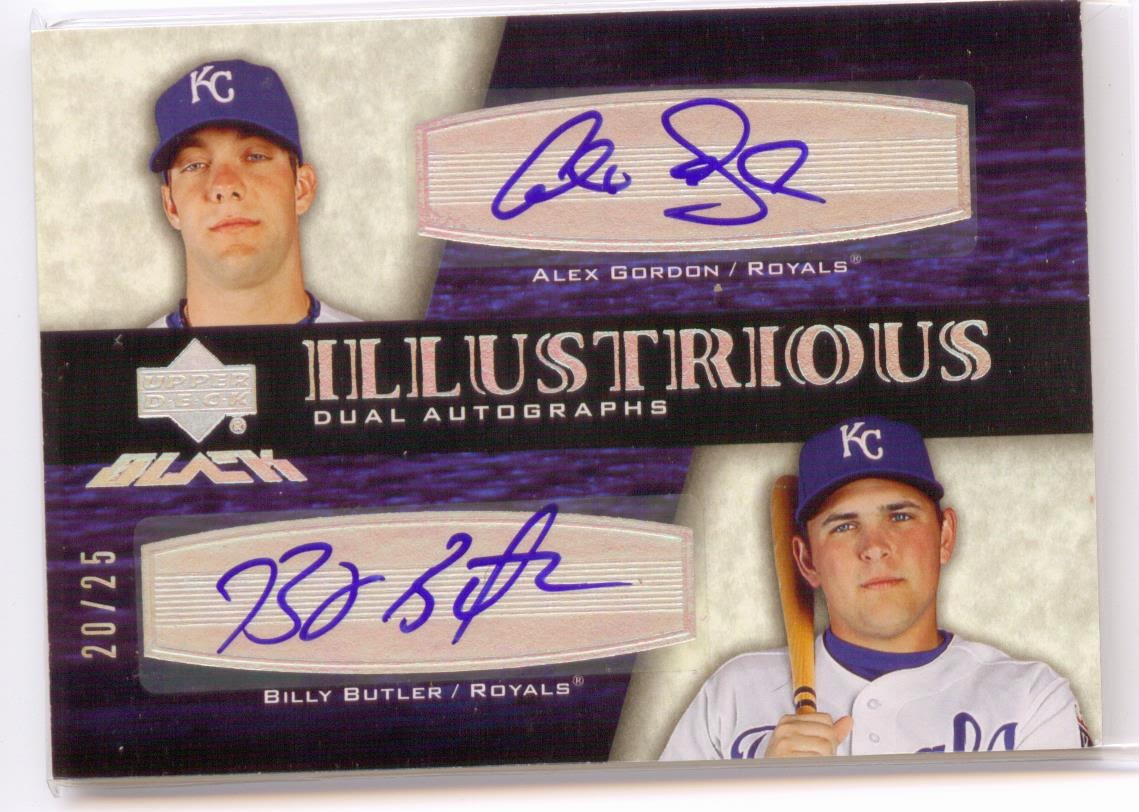 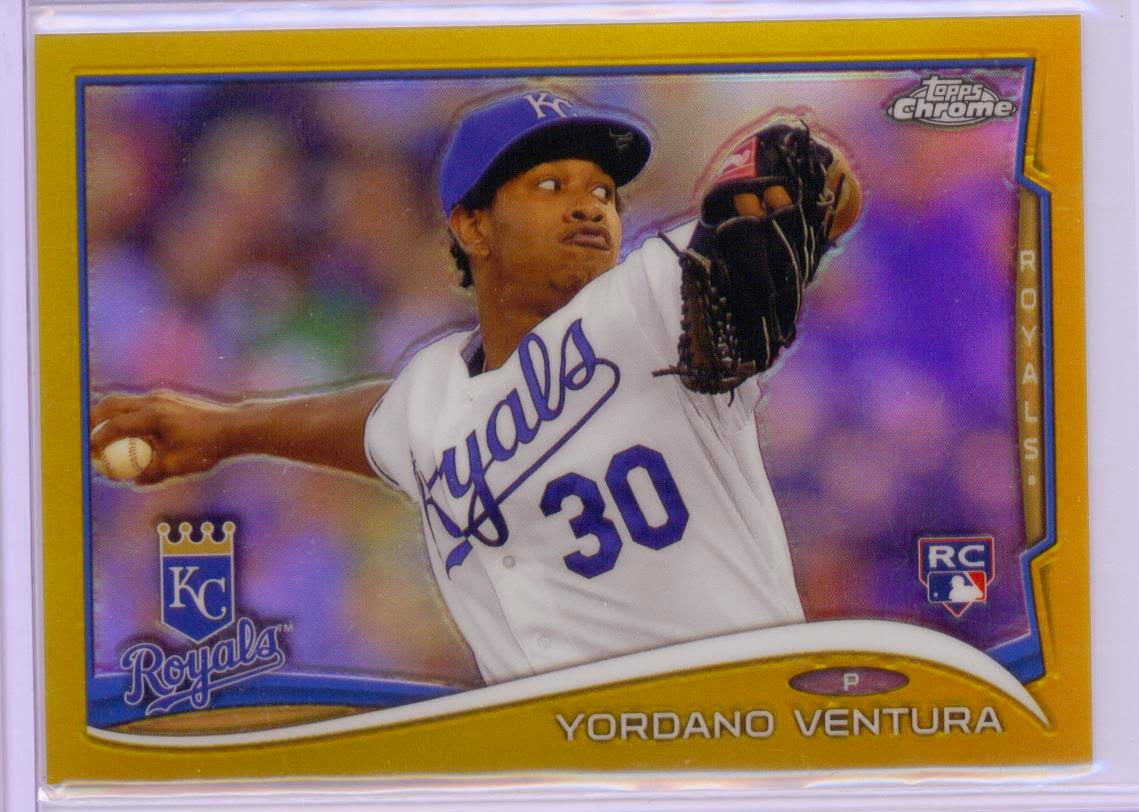 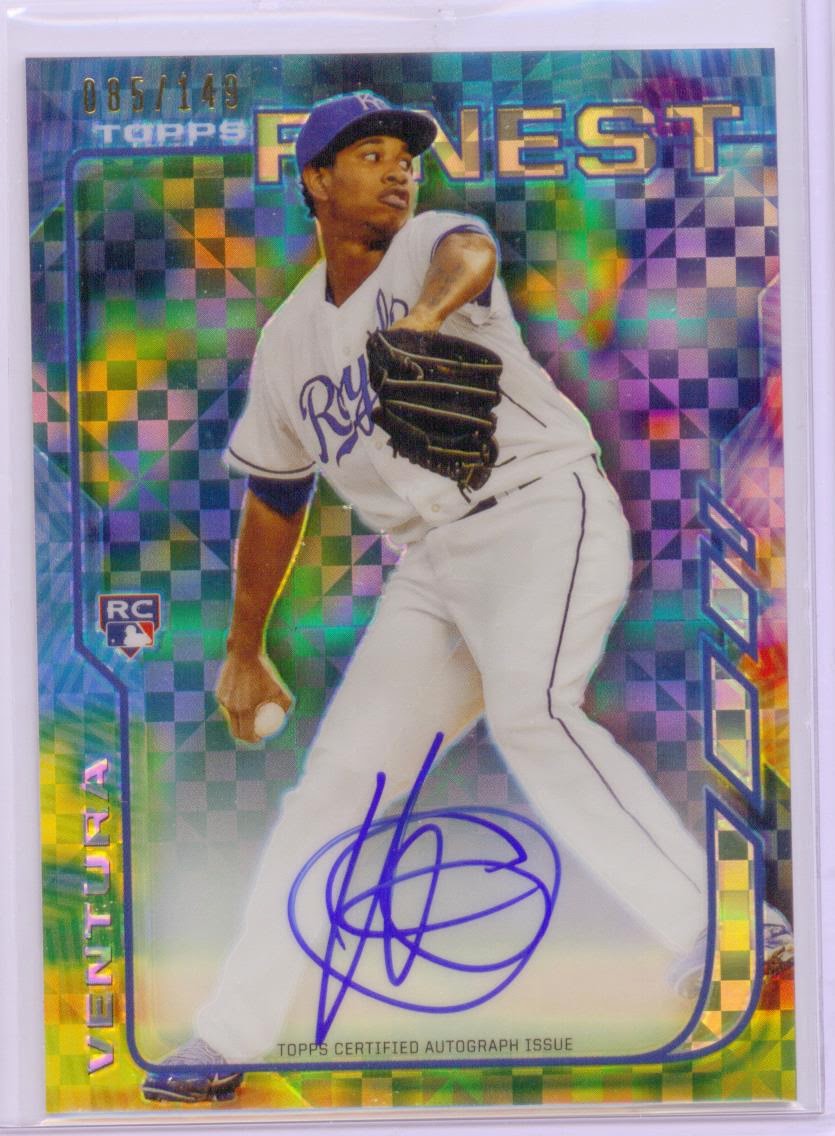 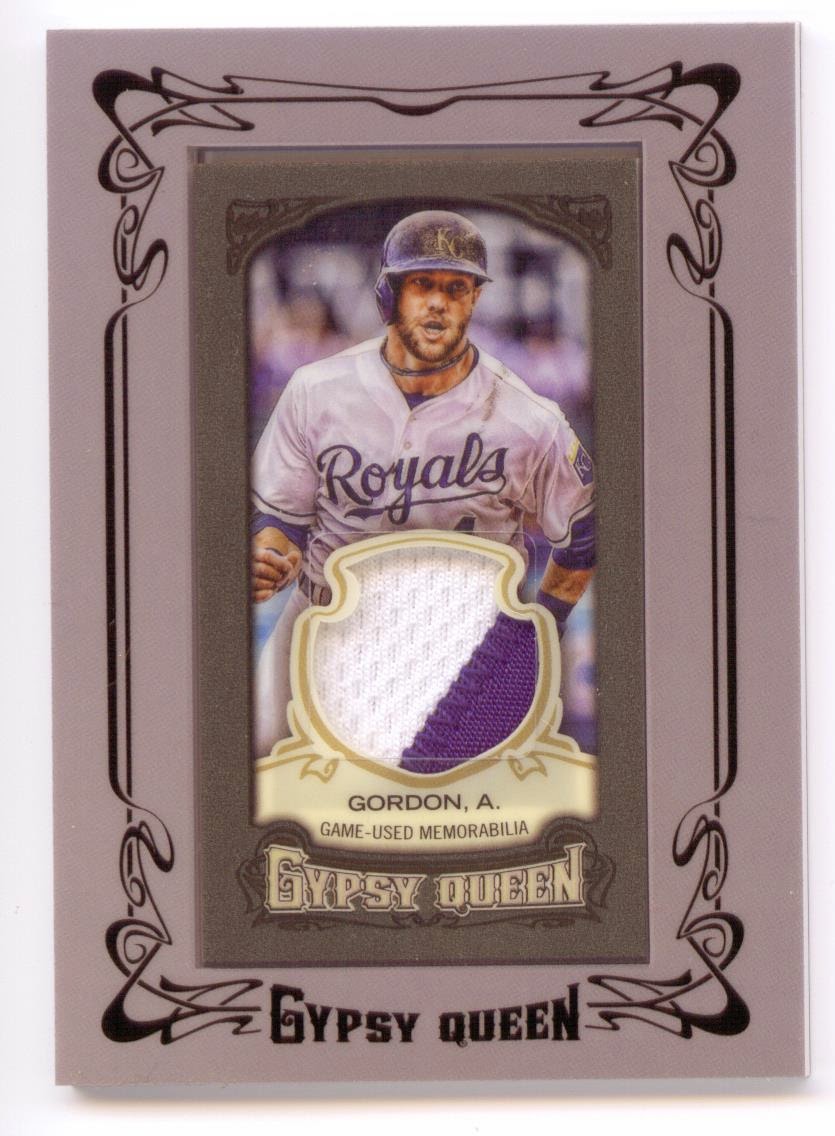 Hey guys, remember me? It's understandable if you don't. Outside of a couple weeks of Flair posts, I've been largely absent. If you're wondering why that is, please stick around. If you're looking for card scans, try again another day. I've got a lot to get off my chest.

If you have a strong memory then you'll know that I've had a pretty up and down year so far. In May I lost my best friend. In June I lost my unofficial grandmother. In early July I lost my house. If you're a true fan of my whining writing then you'll remember this wacky story from back in March, when I was pulled over for "speeding". I had no idea at the time, but that alleged traffic violation would change my life in terrible ways.

To recap, I was coming home from class one night and was pulled over in a podunk small town. A crooked cop wrote me a ticket for going 13 MPH when I most certainly wasn't.

I decided to exercise my American Rights and fight it in court. That didn't go well at all. It turns out that I wasn't the first pompous citizen to think it was wrong to be charged with a crime I didn't commit. The defense attorney had his trusty spiel ready and explained that I could just pay the ticket or I could fight the courts and end up paying the ticket anyways.

At this point I was pretty upset, but I decided to pay the ticket and get this nightmare out of the way. I drove back to that small town, spoke with the city clerk, wrote her a check, received a receipt and bid them farewell. Or so I thought.

One morning in July I woke up to this:

I heard knocking, came up the stairs and saw policemen in my backyard. I went outside to see what was going on and was immediately informed they had a warrant for my arrest. I turned around and was guided face first against the wall and handcuffed. Next I was marched around the side of the house, through my front yard and placed in the back of the police SUV.

I had no idea what was going on. They said the warrant was issued by *Podunk Town* for a failure to appear. "Failure to appear for what?" I asked. They didn't know. The warrant was halfway filled out by the *Podunk Town* city clerk and signed by the judge. At this point I was having a full-on mental breakdown. I was 75% sure I was still asleep and that this was a very vivid nightmare. My ticket was paid weeks prior, I received a receipt in person and again in the mail. There was nothing I could do accept go along with the humiliation. Next thing I knew I was in jail.

After the processing, mugshot and hours of waiting, I was allowed to call family to come bail me out. The hell was only beginning. Words aren't good enough to explain the anger, fear, helplessness and every other feeling that went through me. How do you tell your family that you were arrested for something you didn't do? It's not easy, especially when they don't believe you. How could they though? Have you ever heard of something this backwards? It's like a bad movie. After a few hours of tears and talking, we all realized that this wasn't just a nightmare, it was real life.

The next day I contacted *Podunk Town* and told them what happened. The "them" I spoke with was the director of city zoning. The city clerk was on vacation. She directed me to the chief of police, who promptly ignored my calls completely. Bureaucracy at its best. I retained a lawyer and fought tooth and nail to find out what in the hell happened. After two weeks I was told that "Whoops, looks like we made a mistake. Sorrrrrryyy bout that."

Wait, what? After all this all I get is a sorry? As the days went on depression fully enveloped me. I had been humiliated for literally no reason other than a "clerical mistake". There was nothing I could have done to prevent it and nothing I could do to fix it. I could start to tell that I just wasn't myself. My brain had two modes: sadness and anger. At night I stopped sleeping. I would go up to 72 hours without sleep. My brain simply wouldn't calm down. Every ounce of self-confidence and pride was gone. Once I was finally able to sleep, I'd be subject to the most vivid nightmares you could imagine. Nightmares so real and sickening that it took me hours after waking to believe they weren't real. During the day I was afraid to leave the house or talk to anyone. Sirens and cops sent me into uncontrollable flashbacks.

I needed help. I sought out a therapist and it was the best thing I ever could have done. After a few sessions she diagnosed me with post traumatic stress disorder (PTSD).

It's been over two months since the arrest and I wish I could say I'm all better now, but I'm not. The nightmares are still there, leaving the house scares the hell out of me and my life is in pieces. Meds keep the depression under control and allow me to sleep most nights, but life inside my own head is chaos.

The point of writing this isn't for attention. In fact, I'm scared to have people read this. Four people (outside of my therapist and doctor) know that I have PTSD. Talking about what happened is so incredibly hard for me. Tonight I'm taking a big personal step and telling all of you. I consider you all to be friends, yet the worst thing that can happen from you reading this is that you decide not to read my blog anymore. It's a small step, but it's a big one. Next I need to build the strength to tell the rest of my family and eventually my friends. PTSD doesn't just vanish overnight. Who knows when I'll be able to function semi-normally again. I pray that's soon so that I can put my new MBA and 4.0 GPA to use and get back to being the happy person I used to be. Unfortunately it's not that easy. All I can do is take it day by day.

If you've stuck with me and read this all, I can't thank you enough. You've joined a select group of people that are helping me get better simply by caring. That means more than you can imagine. Thank you all for reading this post, the 149 that came before it, and the hundreds to come.

Topps - You So Lazy

Why is it that Topps thinks they can just reuse photos over and over again nowadays? Back in the day they never would have pulled that crap on us! 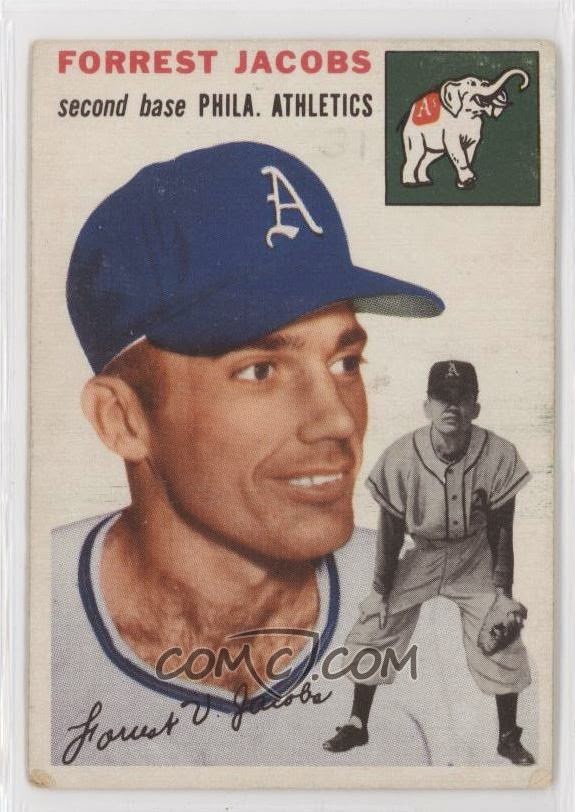 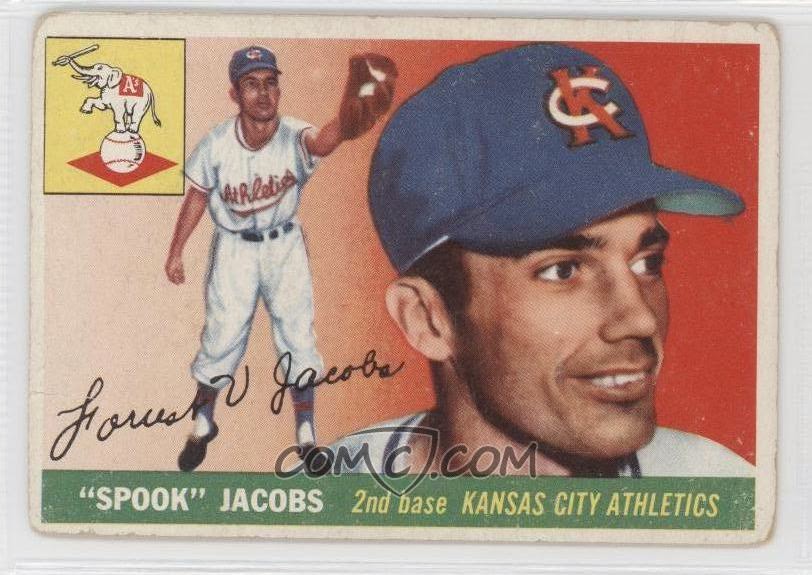 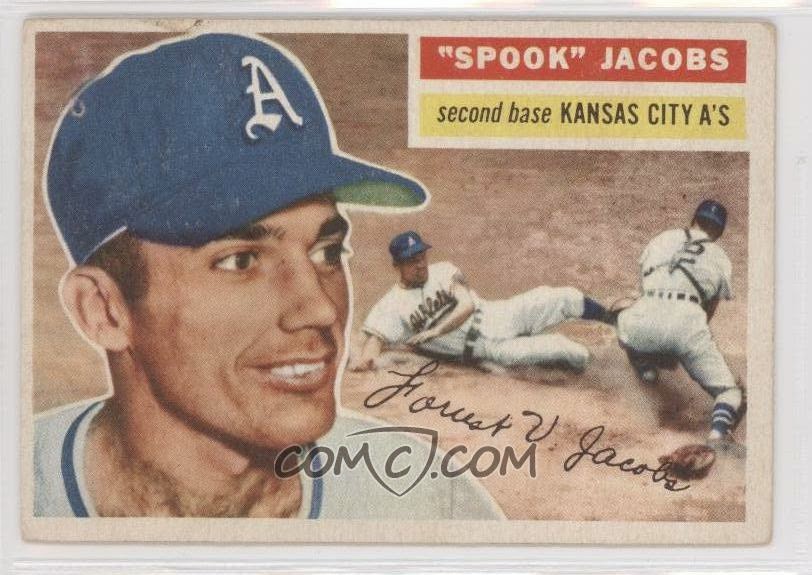