The Hit of a Lifetime... 2 Years too Late

I've been overwhelmed this week with cards. I've started two different posts but decided halfway through that they weren't going anywhere. Hopefully you'll forgive me, you see, I finally got my Black Friday boxes in! I limited myself to only the best deals because I can't afford to be buying anything right now. Oh how we card addicts justify things...

My loot came in the form of six 2011 Topps Value Boxes (five 2011 Update Packs, a Harper Chrome card and a 2011 Bowman Chrome Hobby Pack in each box) and ten blaster boxes of 2011 Bowman Draft Picks & Prospects. Since I wasn't collecting in 2011, I figured I'd never get a shot at building these sets for a good price. With the deals I got, I couldn't resist. I'm glad I didn't! In the first 2011 Bowman Chrome Hobby pack I pulled this thing: 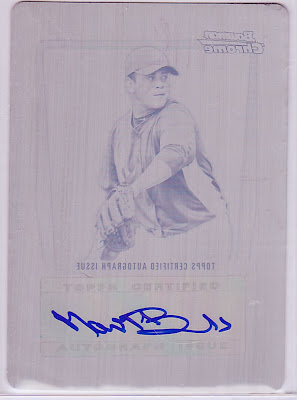 That's the black auto'd printing plate from 2011 Bowman Chrome of Manny Banuelos. Banuelos was the man in 2011 for the Yankees and he went into 2012 as the #13 prospect in all of baseball. It's rare that the Yanks have a top 50 prospect, much less one that's that high. Unfortunately Banuelos blew out his arm and missed all of 2013 due to Tommy John surgery. Reports are that he's rehabbing really well and is back to throwing 94 MPH. He should be ready to pitch in 2014 but who knows if he'll ever be the super prospect he once was. Most Yankees top prospect lists have him sitting outside of the top 10 in the organization, but at 22 anything is possible.

Needless to say, as much as I hate the Yankees, I'm now one of Banuelos biggest fans. If I had pulled this card in 2011, I probably could have sold it for close to $1000, but I'd be lucky to get $50 for it today. If he comes back strong, maybe this ugly little printing plate and sticker combo can justify how much I overspent on cards this year.

Posted by View From the Skybox at 2:53 PM