What originally brought me back to collecting was the appeal of TTM autographs. I bought a box of cards to send off for autographs through the mail and ended up hooked on two great hobbies that go hand in hand. Eleven months ago I sent off a ton of 2013 Topps Series 1 cards to spring training facilities in hopes of getting a few back. I received a lot of them within a few weeks (mostly relief pitchers and bench players) but was blown away by some that I got in return. Today, I received two cards that I never expected to get back after 11 months of waiting. In February I sent them to the LA Angels complex in Tempe, Arizona. They arrived today postmarked from Santa Ana, California. 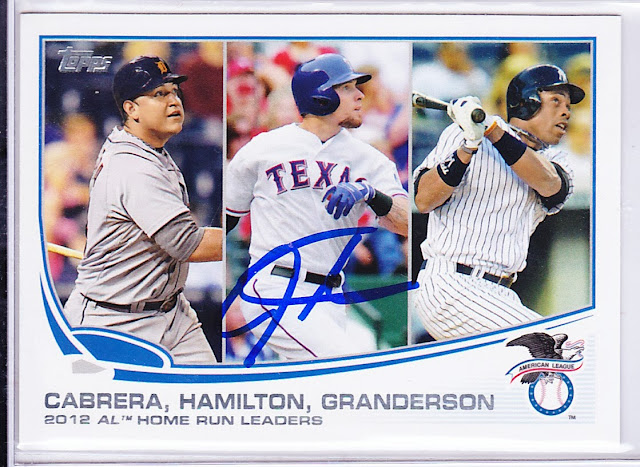 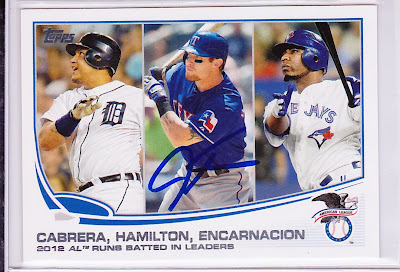 Say what you will about Josh Hamilton, but he's someone I respect immensely. His story is well told. After being the #1 overall pick by the Devil Rays in 1999 he fell into drug and alcohol addiction leading to suspensions and eventually an early retirement. In 2005 Hamilton was finally able to go clean and return to baseball. We all know what's happened since.

If you know any addicts you understand why they say that "Once an addict, always an addict." Once your mind is addicted to something it will forever be that way. You have to fight each and every day to stay sober for the rest of your life. Sure it gets easier with time, but it never goes away. In February of 2012 Hamilton temporarily fell off the wagon at a bar and consumed 2 or 3 drinks before calling Ian Kinsler to come talk to him. The very next day he held a press conference to apologize. Can you imagine that? You're going through something so personal and life-threatening and in the middle of it you have to hold a press conference to let the entire world know that you're sorry for hurting them, never mind your own issues.

Last off-season, after an ugly divorce with Texas, Josh signed with the LA Angels. He struggled mightily for the first few months of the season before starting to return to form late. Again, if you know an addict you know how fragile their state of mind can be. If you know baseball, you know how much of it is a mind game. Hamilton's issues are to be expected, but it takes a special kind of person to battle through them with millions of people watching your every step.

I consider Josh Hamilton a helluva role model for a young man like myself. After experiencing more failure and success than I ever will, he managed to take some time out during his extremely busy life to sign a couple autographs for me during the Christmas Season. How cool is that? Thank you Josh!
Posted by View From the Skybox at 3:48 PM