A Day in the Life of Jim Smith, (Fictional) GM of the 1915 Brooklyn Robins

Nothing can replace baseball cards as my hobby of choice, but one thing does come close. Out of the Park Baseball. The 2016 version was just released this week, keeping me glued to my laptop 24/7. If you're not familiar with OOTP, it's a (mostly) text-based baseball simulator that allows you to take hold of your favorite franchise at any point in their history and manage them using real players (literally 140 years worth of real major league players).

If you want to run the 2015 New York Yankees, you can take control of the current organization, including full rosters for every minor league club. If you want to run the 1978 Pittsburgh Pirates, you'll have everyone from Bert Blyleven to Kent Tekulve at your helm. Not happy with your roster? Make some moves. Propose trades, sign free agents, or leave everything intact for a true recreation. OOTP lets you literally manage every aspect of the team you could dream of and THEN some. If that sounds overwhelming, trust me, it's not. The friendly user interface and tutorials will have you playing at full-speed within minutes, though you'll still be discovering new strategies for months.

Now that you have a feel for what OOTP is, let me introduce you to Jim Smith, the GM of the 1915 Brooklyn Robins. Jim is living in the first day of my fantasy world. I've set OOTP to shuffle players from history around to have them debut at random times. Babe Ruth may appear in 1980 and Mike Trout could show up in 1920. I have zero way of knowing and neither does Jim Smith. It's his job to draft and sign the best available talent to carry the Robins to the pennant.

(click images to expand the size)
Jim's first order of business is to gather with the other GM's to draft teams based on the outstanding talent that has entered their names into the draft pool. We would call this a "Fantasy Draft". Smith would call it a "Humdinger Draft" or something like that. He examines the top talent and gets to work building a dynasty. 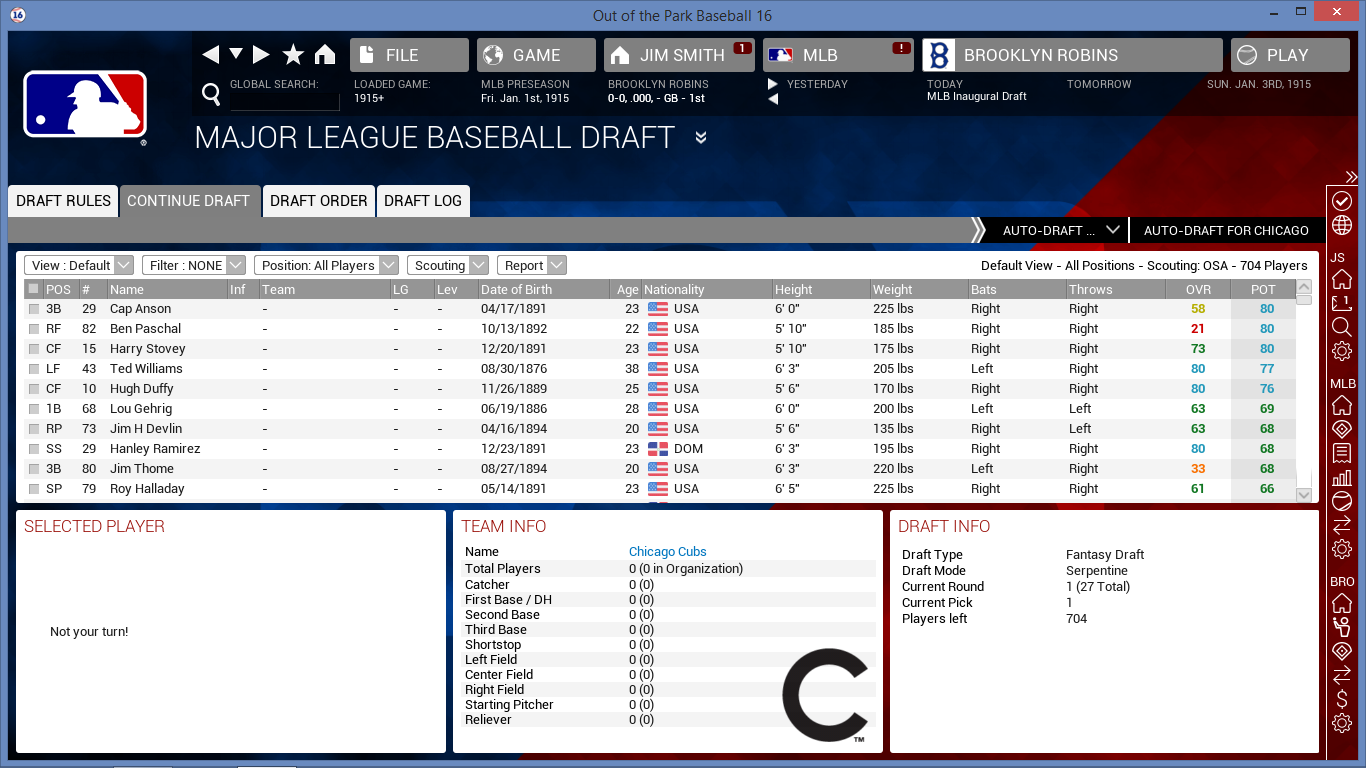 The draft leaves him scratching his head on numerous occasions. His #1 target, Henry Louis "Lou" Gehrig was snatched up before the Robins first pick. Smith ultimately made a 23 year old named Roy Halladay his first round choice. Mixing age and youth, Jim built a powerful lineup and rotation. 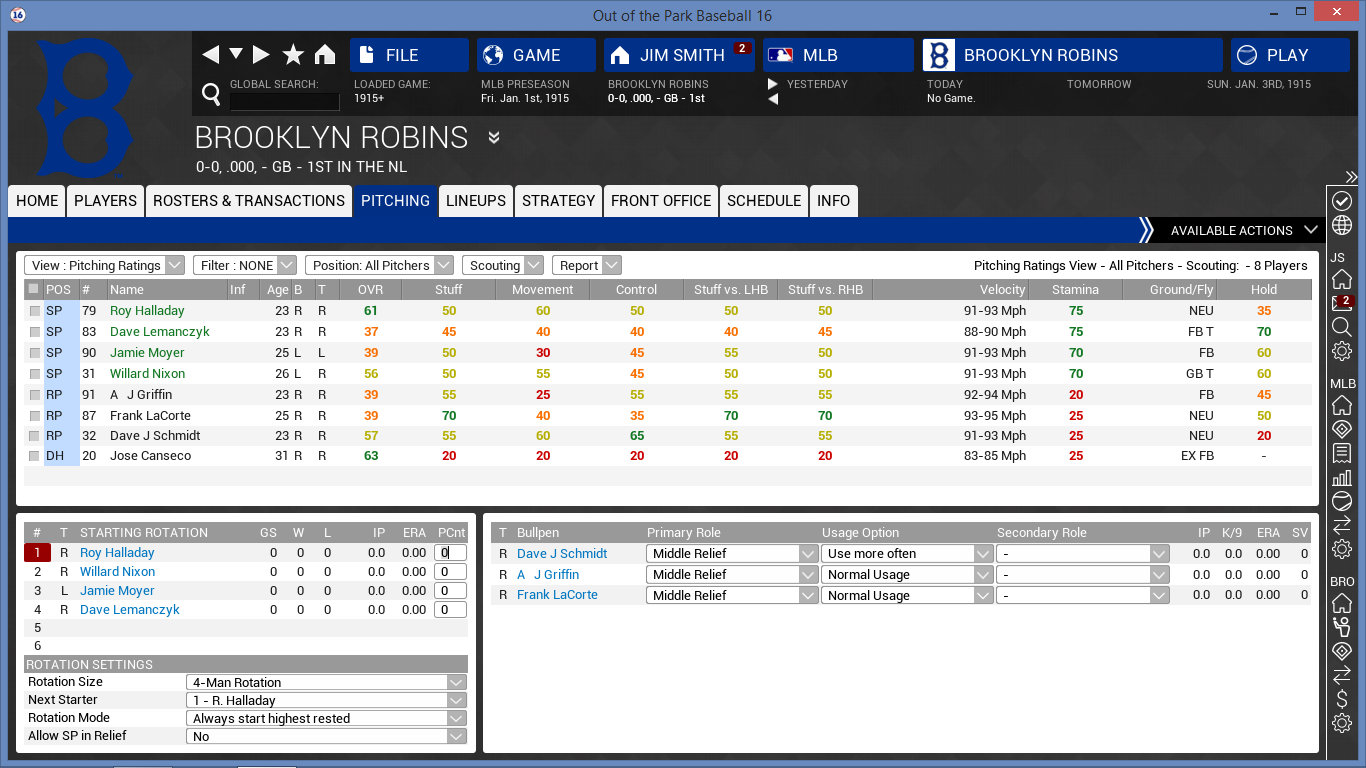 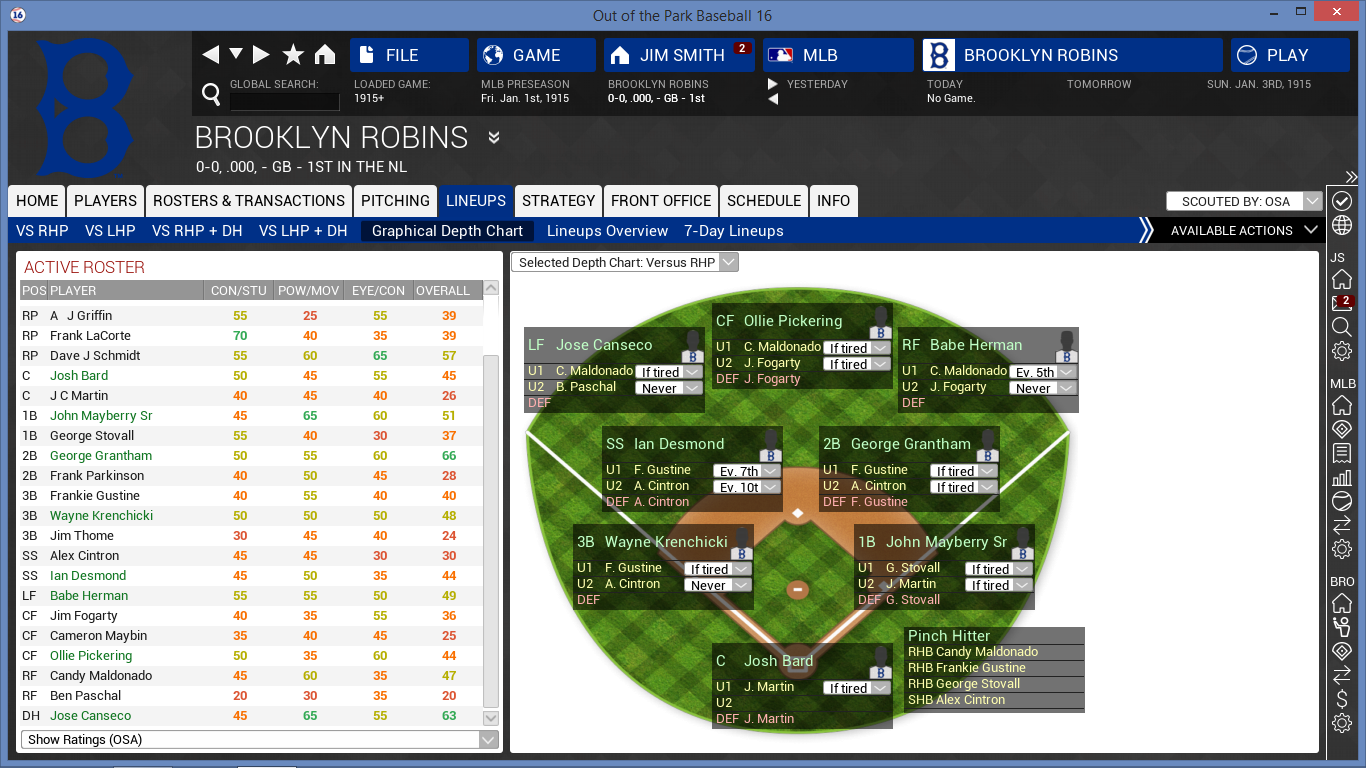 Batting cleanup will be 31 year old Jose Canseco. It'll be interesting to see if he regresses as fast as the real Canseco. If so, the pick won't look so hot. Jim Thome will be one of the more interesting prospects to watch. At only 21 years of age, he'll likely spend a season or two on the reserve roster to develop his talent. The same can be said for high-ceiling prospect, Ben Paschal. The question is whether or not Jim Smith will last long enough to see them mature into the phenoms they could become. 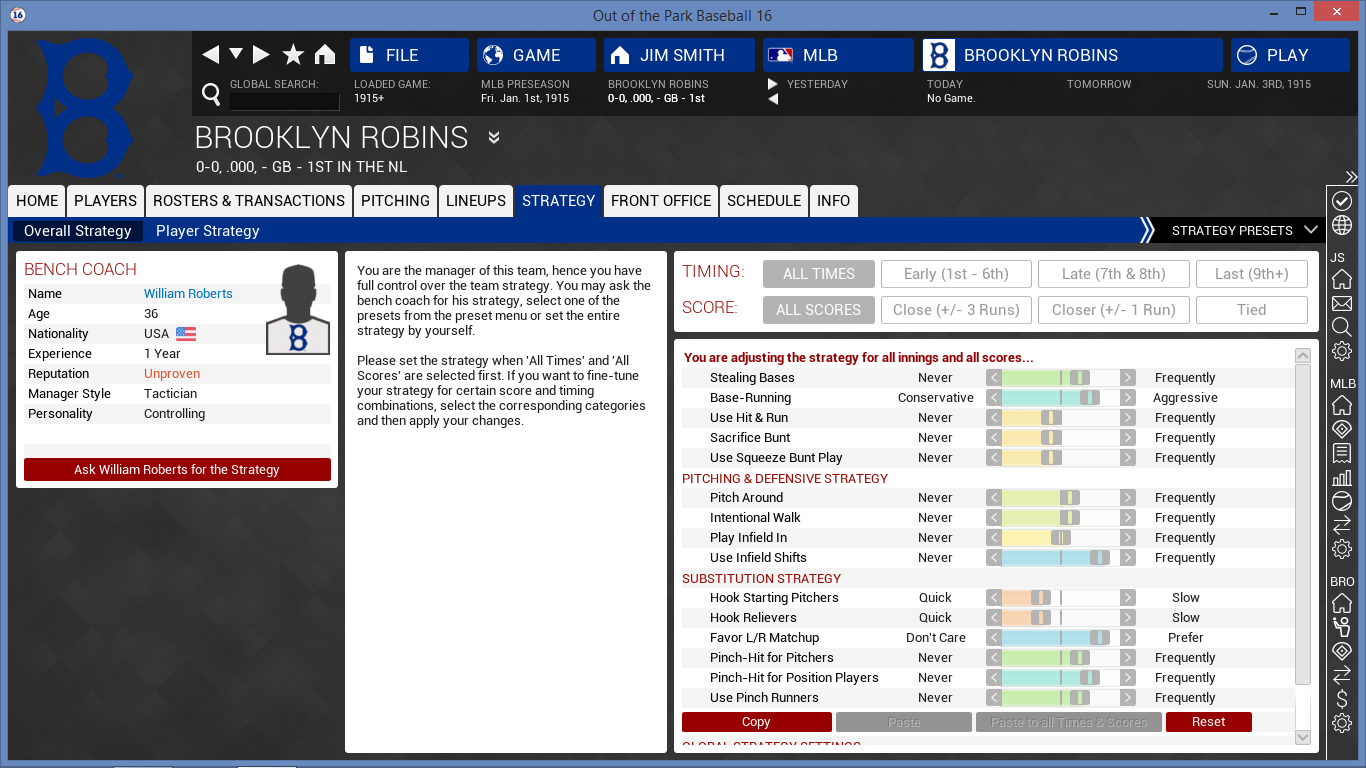 Smith meets with his bench coach, Will Roberts to discuss philosophy for the season. They decide on a speed-happy quick-trigger approach that will surely piss off fans on a daily basis. 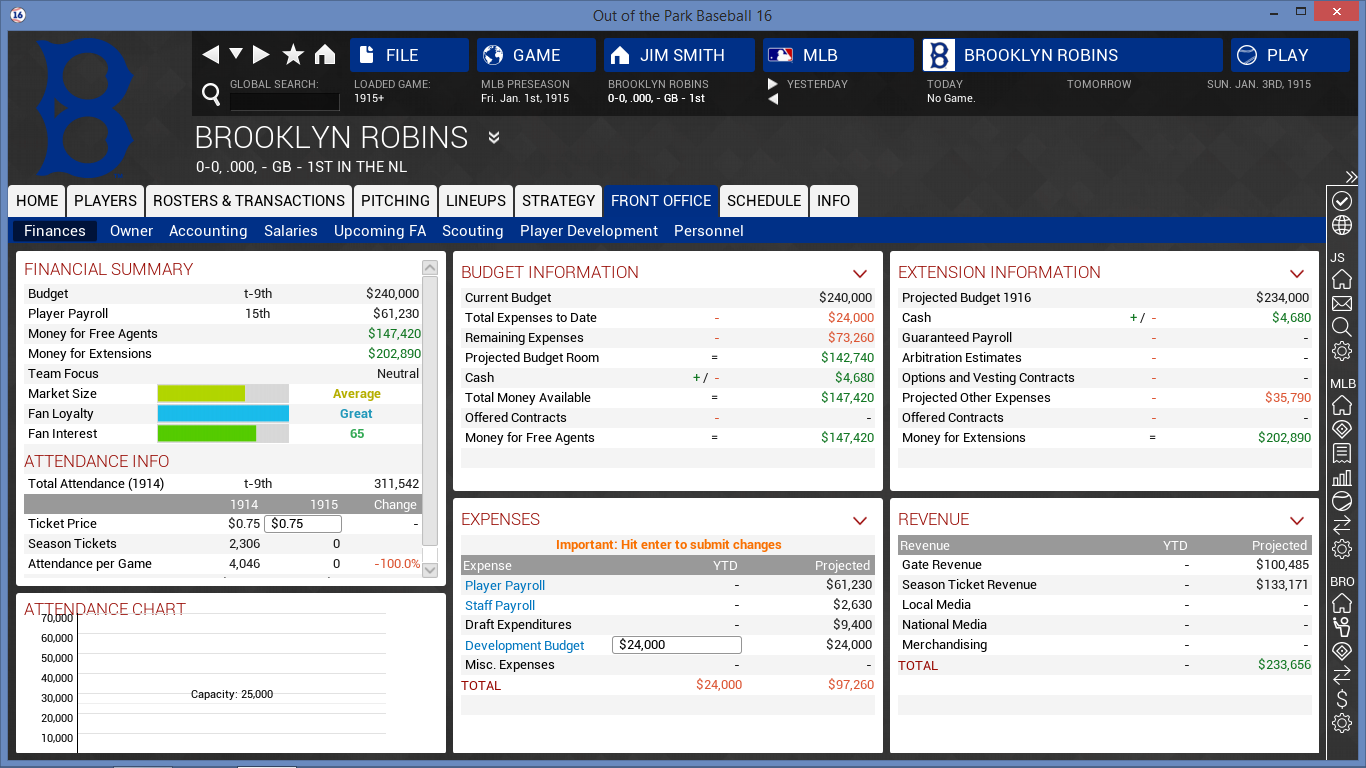 The financial situation is looking strong. Being the Deadball Era, attendance will likely increase slightly over the 1914 average of 4,046 fans per game. 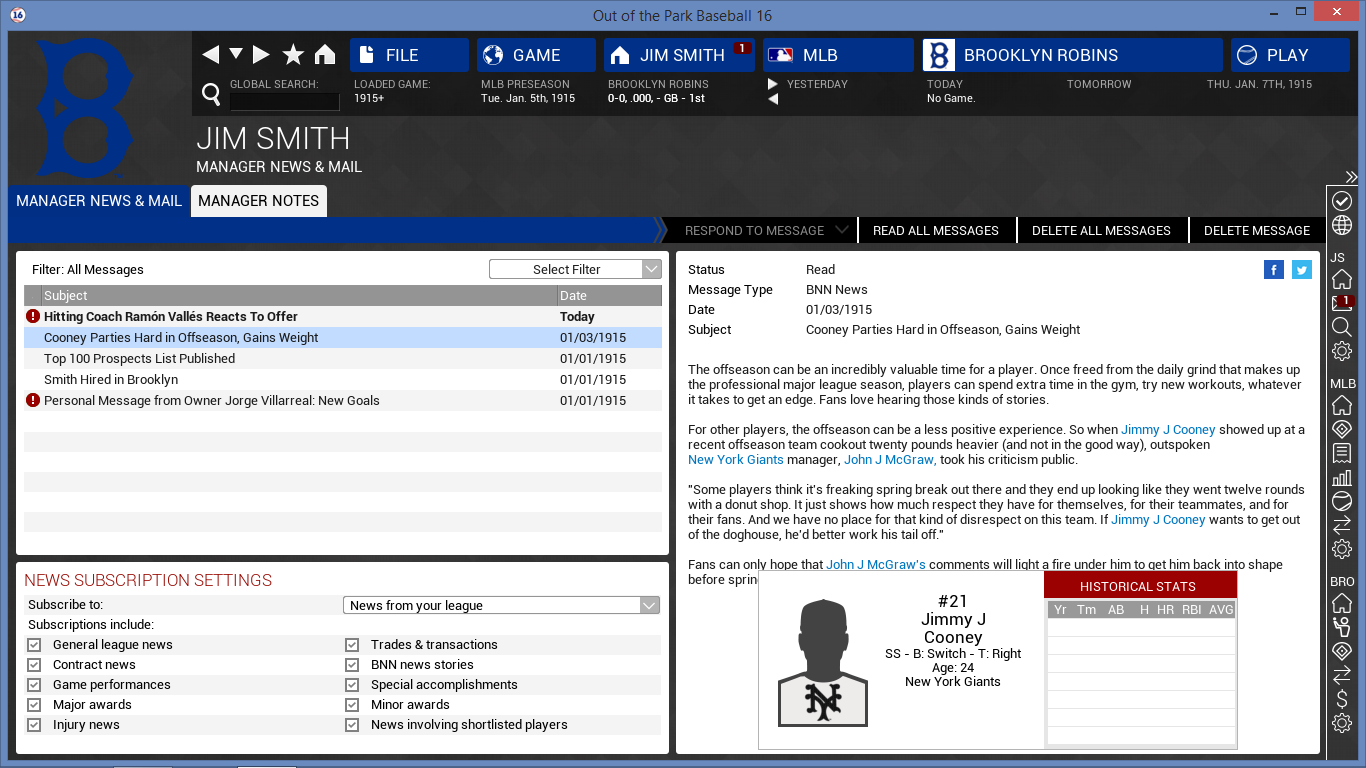 Smith ends the night with a newspaper. Word has just come in that Jimmy J. Cooney, shortstop for the rival New York Giants, has been eating a bit too much... music to Jim Smith's ears.
Posted by View From the Skybox at 12:30 PM